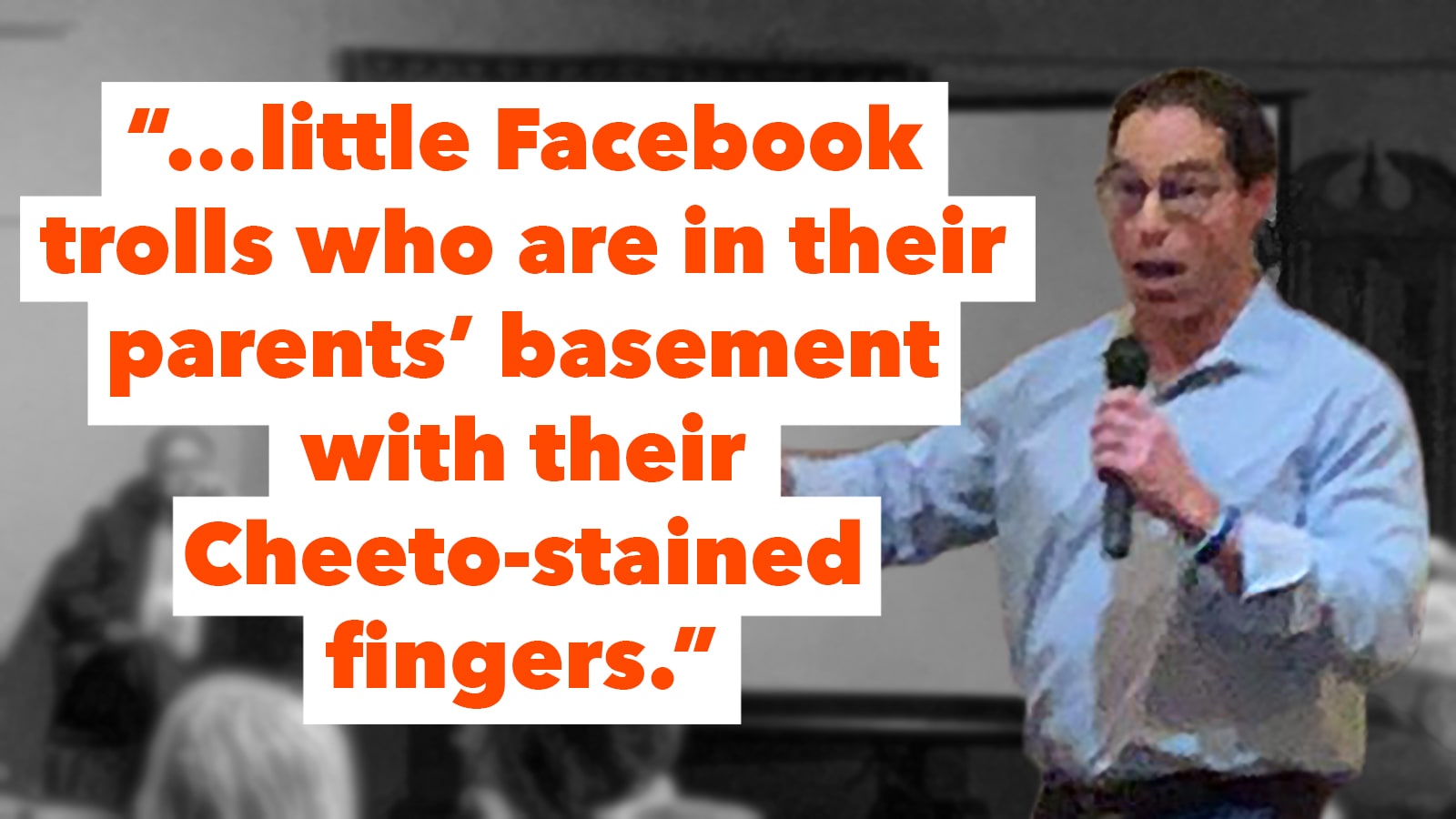 Senate candidate Mark Ronchetti has come under heavy scrutiny from pro-Trump Republicans for his deep ties to NeverTrumpers, his paid staffers calling people “zealots,” his lack of a conservative track record—including never voting in Republican primaries—not to mention his criticism of President Trump, saying he does not support the President’s “tweets and soundbites.”

Now, he is demanding “unity” through a “positive campaign pledge” to try and gag anyone who disagrees with him on policy or questions his record.

As a candidate who shows no relevant experience or issue-based work other than being a liberal mainstream media personality, voters either have to rely on the available information they do have at their disposal about Ronchetti or simply take him at his word. It would be a great disservice to voters if they did not have a full picture of who he is as a candidate, and the same goes for every other candidate in the race.

Ronchetti has surrounded himself with NeverTrumpers who have helped tear down the Republican Party in New Mexico, such as his campaign manager Jay McCleskey—former handler to NeverTrump Gov. Susana Martinez, and the Michelle Lujan Grisham-supporting drug dealer Darren White whose marijuana company donated $11,000 to the current Democrat governor’s campaign.

During Saturday’s Bernalillo County pre-primary convention, Ronchetti demanded fellow candidates sign onto a “unity pledge” directly after bashing Republicans who disagree with him as “little Facebook trolls who are in their parents’ basement with their Cheeto-stained fingers.” He seemed shocked that anyone dared question his past, characterizing it as something he “didn’t quite anticipate,” as if he is entitled to a campaign without scrutiny.

This seems to be another “basket of deplorables” moment, as with failed Democrat presidential candidate Hillary Clinton in 2016, where she disparaged Trump voters with the blanket statement. In fact, it appears Ronchetti has taken this page right out of Clinton’s playbook when she claimed her opponents’ voters “live in their parents’ basement.”

Ronchetti seems so offended by the mere act of questioning him, it may show underlying narcissism and his willingness to gaslight in order to try and put fellow Republicans on the defensive. But it’s not working.

Ironically, after stigmatizing all people who dare point out facts about him as basement-dwelling Facebook trolls with Cheeto-stained fingers, Ronchetti made the claim that he’s “taken as many arrows as anyone,” saying he has “not fired back at a fellow Republican, not once.” That statement proves itself to be untrue with his basement-dweller comment, not seconds before calling for “unity.” No candidates have signed the pledge.

Ronchetti’s pledge, however, is vague, with the quite subjective term “positive” being at the forefront. What does Ronchetti qualify as “positive”? Could it be facts and research that may help voters decide what he stands for? Because that is all JohnforNM.com has published: facts, all of which are backed up with sources, and not a single ad hominem attack.

On the contrary, Ronchetti’s staffers and most fervent supporters have ravenously lashed out at people questioning Ronchetti’s credentials, including one calling them “zealots” in a now-deleted tweet.

Another proponent of Ronchetti’s campaign is the nameless, faceless, strictly opinion-based blog, the “New Mexico Political Journal” (NMPJ), which has slung cheap shots at people who dare to question Ronchetti. Some of the ad hominem attacks include branding Trump supporters as “cult” members, “puppets,” “toadies,” and claiming “Pied Pipers of Personal Vendettas” are being paid by the Republican Party of New Mexico to unleash “vicious” attacks—all laughably untrue conspiracy theories that fall flat on their face.

It appears the writers at NMPJ take deep offense to facts being presented about candidates in a primary and take even greater offense to information that could potentially help voters decide their candidate. They seem unaware that Republican primaries are meant to put all the candidates’ cards on the table so that there are no vulnerabilities for Democrats to take advantage of as an “October surprise” right before the general election. By knowing these facts now, Republican voters can choose the strongest candidate to win in November against radical Democrat Ben Ray Luján with the facts they need to do so.

In the past, NMPJ has not shied away from bashing candidates with ad-hominem attacks in primaries on everything from their looks to their “electability.” But just now, they and their chosen candidates are suddenly exempt from fact-based criticism? The hypocrisy is astounding.

By taking deep offense to the revelation of facts by baselessly claiming that people like myself are being hired by the New Mexico Republican Party to knock candidates, is a sad state of affairs, especially when a gossip blog repeatedly publishes wildly untrue claims—without a single source to back them up.

Of course, a positive campaign would be nice—if in a perfect world. But this is politics, and voters deserve to know who the candidates they are expected to vote for are, knowing both the good and the bad.

Branding anyone who questions a candidate’s credentials as “Cheeto-finger-stained basement dwellers,” seems like a cheap defense for the opportunity to go head-to-head against Ben Ray Lujan in November. If a candidate can’t handle the slightest whiff of criticism or answer simple questions about their past brought up now in the primary, how can we expect them to do so in the general election?

Why should Republicans give Democrats the upper hand by leaving our candidates vulnerable, unvetted, and defenseless by refusing to ask tough questions and point out facts for primary voters to decide?

Instead of pretending they don’t exist, our candidates should wear their records and beliefs on their sleeves, welcoming questions about their pasts, especially since that’s how voters will get to know who they really are and make the most informed choices come election time.

But he doesn’t get to write the rules, especially since he has hired the most divisive campaign staff in the state, has no experience fighting for conservative causes with either his time or financial resources and is now trying to silence the free speech of people simply trying to vet him.

Whatever information Ronchetti may be hiding behind his “unity pledge” needs to come out now before the primary—it’s only fair to Republican voters. It appears we have not even scratched the surface yet with what may be currently concealed.

Instead, Ronchetti should take the pledge, as I have, to fully support EVERY SINGLE REPUBLICAN on the ballot in November, despite who the nominee is. I pledge to commit my time, energy, financial resources, and platform to help elect Republicans at all levels of government in 2020. Will Ronchetti and his surrogates pledge to do the same?