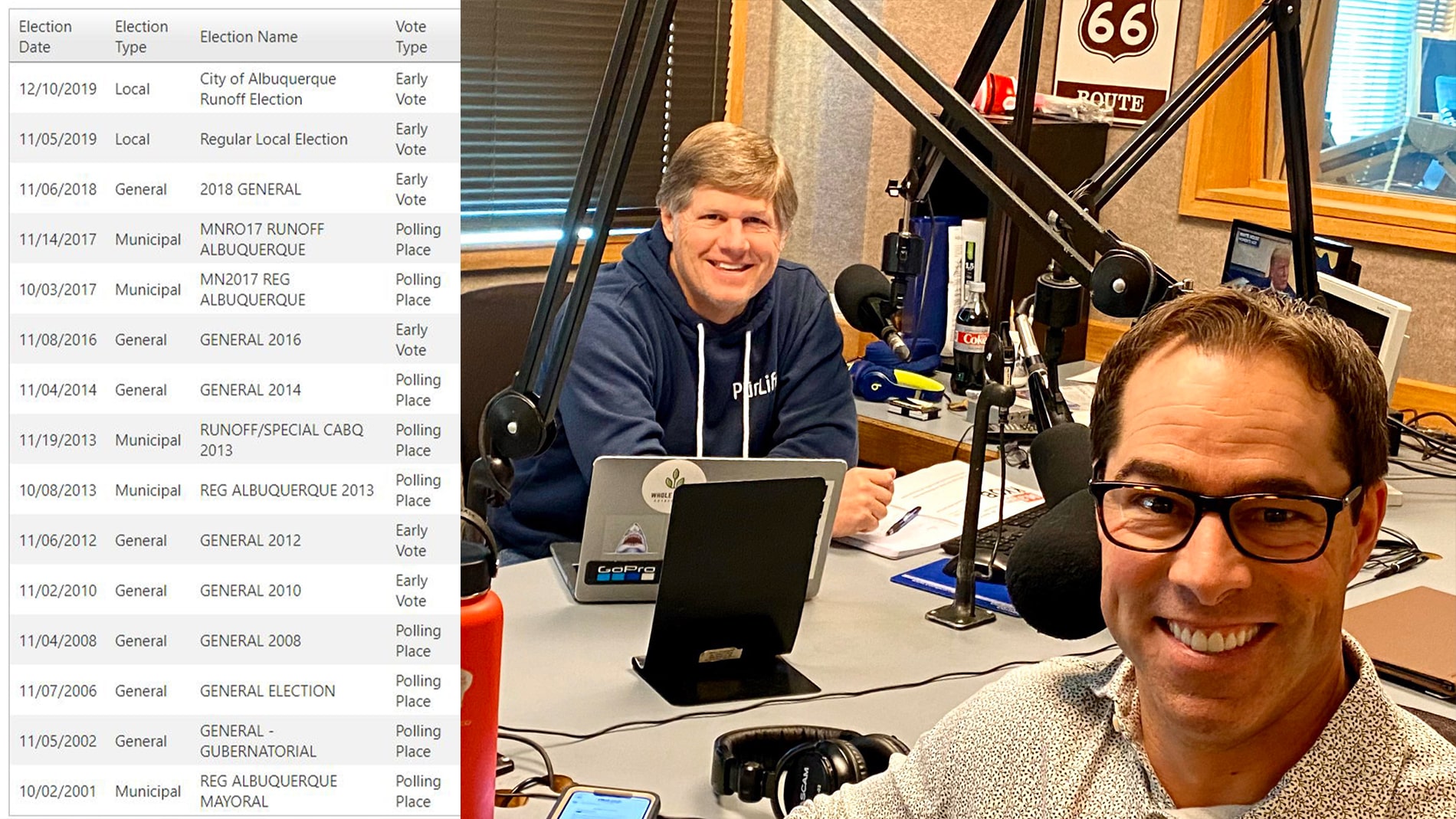 While Republican U.S. Senate candidates travel up and down the state to attend pre-primary conventions, voters are looking to learn more about these candidates’ achievements, past support for issues they say they believe in, and what they bring to the table.

Some of them have been successful business owners and job creators, others have fought against radical legislation and won, some have been educators, working for the Trump Administration, while others have read the weather on local news.

The primary is the best time to test and vet candidates on issues, look into their political past, give them a chance to clear up statements or comments, and answer for their records so that voters can rest assured that they have made the right choice.

Among the candidates running for U.S. Senate in New Mexico, one candidate, Mark Ronchetti, is in focus regarding his past and what he brings to the table. He has previously raised eyebrows regarding important issues and his hesitancy to support the President’s comments and tweets. For more information on Ronchetti, a comprehensive overview can be found here.

A politician a voter can trust

What arguably most voters want in a U.S. Senator is a man or woman they can trust, and someone they can count on to do their bidding in Washington, especially since that person may serve a term of at least six years or more (depending on re-election), as opposed to just two years in the House.

Because of the grave responsibilities required by that office, and the substantial length of time that the chosen candidate may sit there, it is imperative for voters to know who the person seeking to represent them is, and that means vetting them in the primary so there are no surprises in the general election for Democrats to take advantage of.

A voting record can say a lot about a candidate, especially if that voting record is one of the scant information sources available for a candidate like Mark Ronchetti, who said a great many things in his announcement video, but does not have a record to back up those claims, unlike every other candidate in the race, be it in their careers or previous runs for office.  According to the New Mexico Secretary of State and the Federal Election Commission, Ronchetti has never donated to any political candidate, ever.

Some defenders of the liberal mainstream media personality claim Ronchetti could not possibly be involved in politics or show his beliefs at all during his time at KRQE News 13, and that argument has gotten tired fast.

The very fact that Ronchetti chose his career over standing for what he believes in, through monetary means, or through actions, speaks volumes. And a robust case can be made that other men, with even more to lose than Ronchetti, such as KOB 4’s chief meteorologist, Steve Stucker, wears his Christian beliefs and values on his sleeve.

Stucker’s social media pages are plastered with pro-God messages. He headlined fundraisers for the New Mexico Right to Life Committee, supporting the pro-life cause, and does annual charity events to help the community, such as his annual “Parade of Pets.” If Steve Stucker, who works at an equally liberal news station in the exact same job can stand up for his values, Ronchetti can too. There is no question about it.

Other than Ronchetti’s ties to NeverTrumpers, (including his campaign manager, Jay McCleskey, former handler to NeverTrump Gov. Susana Martinez), his support by local drug dealer and $11,000 financier to Michelle Lujan Grisham’s campaign, ex-Sheriff Darren White, his comments saying he does not support President Trump’s tweets and statements, and his hostile staffer who calls pro-Trump people she disagrees with “zealots,” there is not much else to judge his campaign by except … his voting record.

According to a voter file obtained by the New Mexico Secretary of State, Mark Ronchetti has never voted in a primary election during his entire time living in New Mexico.

This means that an unproven candidate arm-in-arm with NeverTrumpers, is himself critical of Trump, and has never voted for a Republican in a New Mexico primary in his life, is now asking Republicans to put their trust in him to be their standard-bearer for a chance to take back a United States Senate seat.

By this latest revelation, which is just the latest to come out, Ronchetti has proven he has no interest in helping his party, not even by contributing a single vote in a single primary election to a single candidate. Ronchetti’s lack of party support now adds to the doubt in voters’ minds as to where he may stand on issues if elected to the U.S. Senate.

By voting for Ronchetti, do Republicans want to pad the pockets of NeverTrumper Jay McCleskey, who has run NeverTrump candidates like former Mayor Richard Berry, with his campaign consulting fees to continue grifting the New Mexican people through campaign donations? Do they want to support Gov. Susana Martinez, who refused to campaign for Republicans in 2016 and 2018, did not greet Trump at any rallies and is now trying to rebuild her political career through speaking at pre-primary conventions? No, this is not what a majority of Republican voters in New Mexico want.

It is county pre-primary convention week, which means it is time for Republicans in all 33 counties to move one step closer to choosing a nominee in this consequential race for U.S. Senate at their local business meetings.

As reported on last week, NeverTrumper Susana Martinez has been invited to speak at the Bernalillo County Republican Party pre-primary convention and will have thirty minutes to make a political speech—an unconventional move, since a pre-primary convention is historically and traditionally meant to be a business meeting, not a political campaign event. Susana is also not on the ballot herself, which raises questions as to why the governor who left office with an abysmal 35% approval rating while leaving office is speaking at all. Will 65% of attendees stand up and walk out in disapproval?

Since Ronchetti has now proven his lack of ties to the Republican Party, his allies have made pitiful and baseless attempts at attacking Republican Party leadership, including Chairman Steve Pearce and Executive Director Anissa Tinnin. He is attracting anti-GOP supporters, such as ex-libertarian candidates, failed congressional candidates now bankrolling Democrats, and Ronchetti’s campaign is being spearheaded by the very people who have broken our party apart.

On Tuesday, it was announced by Secretary of State Maggie Toulouse Oliver that the New Mexico Libertarian party will keep their major party status, by the skin of their teeth. She wrote, “Although the Libertarian Party did not have a candidate in the 2018 New Mexico gubernatorial election, it met this requirement because it did have party candidates that met the 5% threshold of votes for a statewide position.”

According to Libertarian Party chairman Chris Luchini, “the Libertarian Party already has a candidate lined up for this year’s race for the open U.S. Senate seat,” an unknown player in the 2020 U.S. Senate election, which can make or break the next election for Republicans, as the development will no doubt help Democrats if the right candidate is propped up, and we CANNOT UNDER ANY CIRCUMSTANCES LET THAT HAPPEN.

With all we know about the people behind the depths of New Mexico’s own political swamp, how can we be sure that NeverTrump-connected candidates like Ronchetti won’t run as independents, or be appointed as Libertarians if they are not successful in the 2020 Republican primary?

As a state, we cannot afford to have another repeat of 2018, where failed presidential candidate-turned Senate candidate Gary Johnson split the vote in the U.S. Senate primary, guaranteeing Martin Heinrich another term in the Senate. If Ronchetti is not successful, will he try and revive his campaign by splitting the ticket and ensuring radical left-wing extremist Rep. Ben Ray Lujan a seat in the most deliberative body in the nation? WE CANNOT AFFORD FOR THIS TO HAPPEN.

There are many qualified candidates running for this seat, and years of experience in pro-life politics, education, business, construction, and so many other skills, and before making any brash decisions to support or oppose a candidate, their record, as well as their campaign messages should be examined. If one is missing, the consequences of electing an unproven leader, in either politics or business, can be devastating for our state or years to come.

I pledge to support EVERY New Mexico Republican who wins the party’s nomination in 2020, and I will actively encourage their election to the offices they seek. Backing independent and Libertarian candidates only do one thing: takes away a vote from Republicans, who desperately need to win this election.

Right now, I urge all Republican candidates and their paid surrogates, including Mark Ronchetti, to take this pledge as well, to prove that they too support the Republican Party, and would do nothing to hinder other Republicans from election to office, especially that of President Donald J. Trump. This is what party unity looks like, and all Republicans, despite their personal vendettas against party leadership should work to support their party —especially its leaders—to make New Mexico a better place.