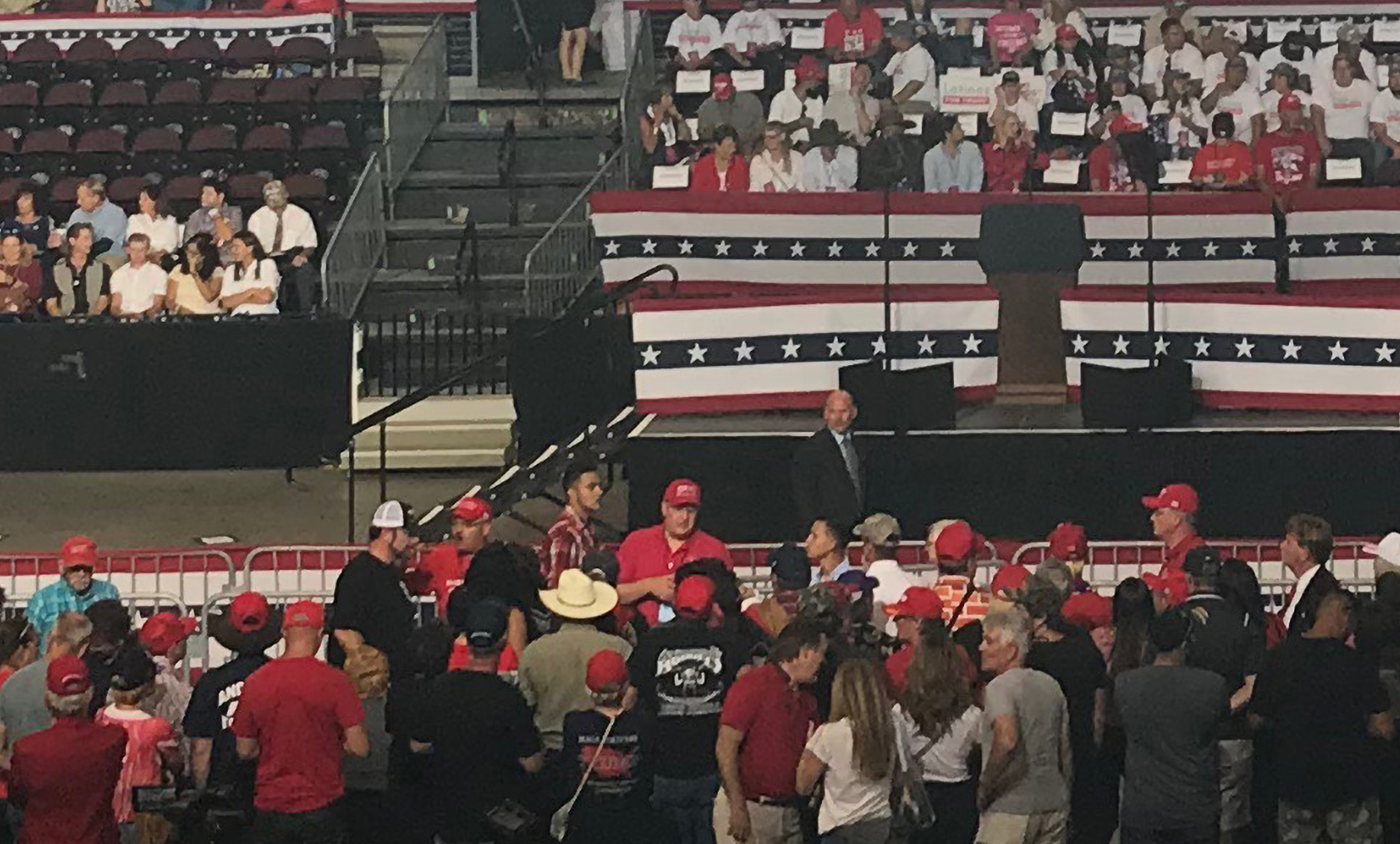 On Monday, 8,704 Trump supporters gathered inside the Santa Ana Star Center and approximately 1,500 were outside for President Trump’s “Keep America Great Rally”

Despite the huge support for the President inside and outside of the event, there were a handful of protesters, a few at the beginning of Trump’s rally, and one at the tail end, which Trump hilariously humiliated, saying “Gee, it’s too bad. He did it right in the crescendo. How do you top that?”

At the beginning of the Trump rally, attendees could see a young man in a black shirt with a plaid shirt slung over his shoulder, fidgeting and acting strange. He paced around the venue, walked in and out of the entrance, and at many times could be seen sitting on the floor right in front of the crowd.

Once I spotted this strange behavior, I immediately recognized the person — his name is Luis Leyva, and he can be seen around the Round House come legislative season to support pro-criminal alien bills with the illegal alien champion group “NM Deam Team,” a subsidiary of the nationwide George Soros-funded group “United We Dream.”

Now, no one knows exactly who funds the group, since it classifies itself as a 501(c)(3) organization, so it doesn’t pay taxes, and it doesn’t have to disclose its donors. Essentially, it’s a tax writeoff for wealthy liberal donors such as billionaires Tom Steyer and George Soros.

Leyva has been spotted supporting New Mexico’s left-wing politicians, as you can see below:

The above examples are just a taste of Leyva’s radical left-wing activism, although there are multiple other specimens.

Once I and other rally attendees caught on to Leyva’s presence at the rally, we alerted the Secret Service to his location, and let them know about his anti-Trump activism. For some reason, Leyva was wearing a blue “volunteer” badge, most likely his cover so he was not suspected as a protester in the event, since he signed up for the credential.

On multiple occasions, Leyva was confronted by security guards and Secret Service, and it appears from what he told them that he was denying what they were asking him about, at one point, being escorted off the floor to another area of the venue, although he made his way back into the crowd.

During President Trump’s rally, Leyva fidgeted and acted nervously, but did not interrupt. It was only when the last protester, a man located on the right side of the crowd began chanting, that Leyva slipped through the crowd and exited from the left-side entrance, possibly someone Leyva was associated with.

It’s unclear if Leyva’s job at the rally was to interrupt or to be a lookout for his protester friends. Either way, he didn’t seem to be very effective at either, since his protester friends were located pretty far away from where he wandered (the right side of the stage).